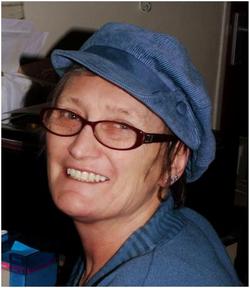 
Anni is a writer of poetry and, occasionally, prose. She has been a performance poet for rather longer than she cares to remember and has read her work in Wales (where she used to live), England, the USA and, of course, Ireland. She now lives in Co Mayo and, as well as performing with the Hermit Collective, is a member of Pen and Ink Writers. She also offers workshops and readings.

Anni also presents an Arts magazine programme and produces radio plays on Claremorris Community Radio and is always interested to hear from anyone interested in being involved in either of these.

Her poetry and prose have appeared in a number of publications, including The Cuirt Journal, Of Sawn Grain, Salvo, The Scotsman and Index on Censorship. She has also produced two solo CDs of poetry readings, Anam Cara and Moth, and another, This is… Salem, as part of a team of five poets.

The security of war
her life
from birth

the taste
turns adult stomachs
fills her own

death in life
the return
to the perils of peace

green flecks
new
in battle ruts
entice her
after the sheep

the minefield
dormant
through the conflict
erupts
lava of screaming blood

sheep ripple away
pause
graze on
inured to blasts
and peace-maimed children.

forsaken: the fleet flown
seeking the autumn herring
while she awaits
the winter whiting.

His touch would be
her last memory

knowing it was right…
…feeling only guilt

her touch would be
his last memory

Down where the river's overflowing soaks
the rank wild-cherry wasteland, raucous croaks
sound klaxons through the bogs,
rake slivers through the pall of peace that cloaks
the slime-green sloughs and mud-and-gravel chokes
– the kingdom of the frogs.

They glory in their realm, where rotten logs
and bags of rubbish, torn by feral dogs,
lie equal in decay.
Their playgrounds are the pools which litter clogs,
where tyres and engine parts with rusting cogs
form stages for display.

The Alder and the Hawthorn and the Bay
are mighty giants in their midget way.
This is no place for Oaks;
for trees must join the game the lordlings play,
where tiny kings and princes hold their sway
in one of nature's jokes.